We’ve always known that human beings are superficial.  In today’s photo-centric world, we value men who are cut, women who are svelte.  Everyone else–the lumpy, chubby, tubby, saggy–just don’t fit into the frame.

But there’s an evolutionary fallacy in our love for all humans thin and tall.  We might prefer for people to be skinny, but we love wild animals that are atrociously fat.

For example, everyone loves bears. Polar bears, panda bears, black bears, you name it.  Bears have become so cuddly and lovable that if I were ever to encounter a bear, I’d half expect it to come bearing Coca-Cola and a good forest fire story.  Same thing with penguins.  While I generally hate all other birds, I love penguins: mainly because they’re fat and furry and they’re featured in almost every single animated movie out there (we even saw penguins in Madagascar… really?).

Honestly, our love for blimp-like animals doesn’t make sense.  I could sit at the zoo for hours, watching hungry, hungry hippos chew on grass.  Yet, if I were to see some obese human being sitting with a pile of ribs, I’d probably have a gag reflex.  If I were to meet a furry, plump, waddling man, I would not wish to see him on the movie screen.  And if a group of dancing, naked, fat guys tried to sell me Charmin toilet paper, I would almost prefer just to air dry. (Almost.)

Our human superficiality is counter-intuitive, especially when seen from a Darwinian lens.  Why would we, as human beings, favor small people and big animals?  It’s clearly easier for a giant bear to eat you when you’re a tiny person, versus when you’re the size of a tugboat.

So, I’d like to change the current paradigm of our superficial human nature.  Instead of looking down on them, we should just start embracing fat people.  The fatter, the better.  Our fellow corpulent friends are just trying to correct for the thinness of our voluntarily-starved populace, where a strong wind in Hollywood could blow a starlet away, right into the open jaws of Smokey the Carnivorous Bear.  Fat humans are doing us all a great service: intimidating animals to think that people, too, can be large and in charge.

Of course, if you can’t stomach the idea of fitting your arms around your neighborhood chub, then perhaps you could go the other way too… Start spreading the love to skinny animals. 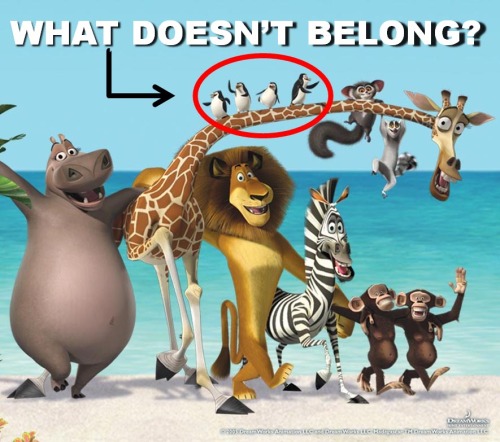 Loving (Not) Having It All

Back in September 2008, I started this blog as an escape from the daily doldrums of the corporate world.  I originally began writing because, like many people just out of college, I didn’t know what I wanted to do.  The real world wasn’t charted out like the first 22 years of my life.  Before, I simply went from one school to the next.  Suddenly, on the cusp of college graduation, I was faced with a litany of decisions I had to make.  What city did I want to live in?  What career did I want to pursue?  What did I want to do with my life? 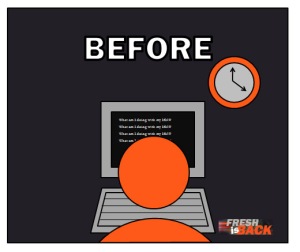 It was a great problem to have, yet I agonized over the decision: to follow the typical corporate path (finance > some cushy job > a life of picket fences and clam bakes) or to pursue some ridiculous, crazy, unclear, undetermined, unknown dream.  I wanted to have it all, but I was quickly realizing that I had to choose.

For 2+ years, I did the safe thing.  I worked at a big company in a glossy building with a stable salary.  I immersed myself in spreadsheets and statistical models, seeking refuge in the certainty of numbers.  And while this life was great, comfortable, and even enviable, I still yearned to do something different.  So throughout all of this, I wrote over 200 posts and 80,000+ words on this blog, covering topics ranging from Ryan Seacrest to friend feudalism to choosing between New York and LA.  I’d come home after long nights at work and write TV scripts.  I still held out hope for the undetermined dream.

And then it happened.  Last week, I got an offer to write for television.  It’s a small show on a small network, but it’s an opportunity to actually write words that will go on paper and then get on air.  So, on Tuesday, I quit my corporate job.  I waved goodbye to the glossy, black building, and I left behind the comfort of the safe and the known.

It’s somewhat terrifying to be heading off to the writers’ side, where there is no certainty, no tried-and-true formulas that can be applied like in the corporate world.   Yet, no one can ever have it all; at some point, we all have to choose.  And at least now, I feel like I’m much closer to answering the question of what I want to do with my life.

I have been incredibly lucky throughout the past three years, and I could not have done any of this without the support of my family, friends, and colleagues.  I suppose the theme of this blog must change, given that I’m no longer clawing my way out of the corporate world.  Still, I will continue to write on this site, rambling about grammar, technology, and growing old with cats… However, if you expect the quality of my posts to improve now that I’m a professional paid writer, please don’t hold your breath.  It’ll still be the same old drivel… unless I get this crap optioned for TV.

Tagged as careers, corporate world, dreams, finance, safety, what do i want to do with my life, writing, writing world

Why hello, math.  It’s been so long that I barely recognize you anymore.  I think it’s been five years since the last time we saw each other… Remember, I was taking a sophomore elective, and you were using differential equations to kick my ass?  Those were fun times.

Looking back, we had some good years together.  You were the one who first taught me about PEMDAS and the world of acronyms involving My Dear Aunt Sally (multiplying, dividing, adding, subtracting).  You taught me how to draw parabolas and incorporate star plots into my notebook doodling.  And even though I never admitted it in high school, I secretly enjoyed all our inside jokes, like “√-1 ♥ Math,” “Don’t Drink & Derive,” and any reference to apple pi. 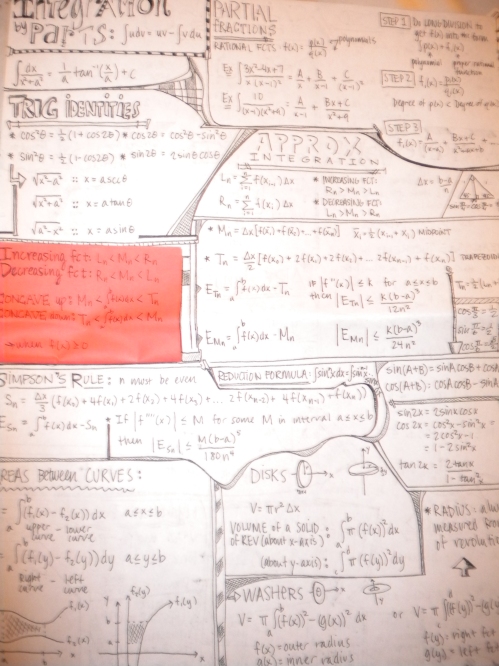 But since those good old days, we’ve gradually grown apart.  Once upon a time, I could have told you all about polynomials and orthogonal trajectories and monotonic sequences.  Now, I have no idea what any of those words mean.  All I have left is a pile of incomprehensible notes that reminds me how dumb I’ve gotten in the past five years.

And for all of this, I blame you, math.  You claimed to be a universal language.  You claimed to be useful. Well, since I’ve gotten out of school, no one has asked me about sines, cosines, or tangents. In the world I live in, “integral” is an adjective, not a noun, and saying “I have 5!” kids means you have five kids, not 120.  I don’t need to do long division by hand, I’ve never been asked for the quadratic formula, and I have yet to see anything shaped like a rhombus.

Today, I only encounter you through My Dear Aunt Sally (she’s like the math slut that’s easy and manages to get around).  We had something special once, but I’ve realized now that I don’t even know you anymore.  So this is it: my final goodbye.  And as for Aunt Sally, I may soon forget her too. I’m getting a brand new calculator this week.

The big news in the entertainment world this week has been all about American Idol — who will be the judges for next season?  Simon’s out, Ellen’s out, J.Lo’s out, but Steven Tyler is (reportedly) in the mix.  Yawn.  Well, even though I no longer watch the show, I am here to make my plea.  American Idol, please bring back… PAULA ABDUL!

Abdul was with Idol from the very beginning, ever since its auspicious start in 2002.  She was there back when Simon Cowell was still an unknown British crank, and Ryan Seacrest was just the spiky-haired sidekick to Brian Dunkleman.  Throughout the years, Abdul established herself in Idol circles as the sweet, caring, and often-incapacitated judge.

While Abdul was often criticized by critics for not being critical enough, this criticism is ultimately flawed (kind of like this sentence).  Although Abdul’s contribution to the judging panel was limited, her presence truly transcended American Idol.  With Paula, she wasn’t just there for the music.  Instead, she was so much more.  She brought critical issues to the forefront, opened dialogue on everything from healthcare reform to prescription drugs, and spearheaded long-needed change to America.

Some examples of her most important work:

A Leading Proponent of Healthcare Reform: In 2005, Abdul landed on the cover of People Magazine, detailing her “Medical Nightmare.”  In the article, she discussed the chronic pain from an old cheerleading injury that led to some of her bizarre Idol behavior (eg. slurring her words, falling asleep, clapping as if she had flippers instead of hands).  Although she didn’t say it explicitly, Abdul was making an unmistakable call for  reform.  After all, if one of the wealthier women in the country can’t get adequate care, then how is Joe the Plumber going to survive?  Plumbing is more taxing than cheerleading, you know.  And now, five years later, we have universal healthcare. Thank you, Paula “Pelosi” Abdul.

A Feminist Beacon: Controversy arose when dismissed season 2 contestant Corey Clark claimed that he had a 3-month affair with Abdul during the show’s taping.  His book, “Sex, Lies, and Paulatics” not only stretched the homophonic properties of the English language, but also exposed a potentially sordid side of Idol.  However, (if true) the affair only revealed that Abdul used her power to lure young men to her britches.  She was simply following the timeless example of men who have done the same.  (Of course, her one transgression was that of choosing Corey Clark… bad taste, Paula).  But still, without Abdul’s message of female empowerment, we wouldn’t see a record number of women running for office in 2010. It’s a lot easier for cougars to prey on young men when they have the full backing of a political platform.  Meg Whitman’s male interns better watch out. 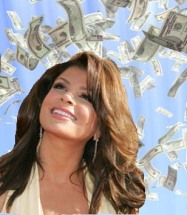 An Economic Bellwether: Abdul reportedly turned down a $5 million+ deal to return to Idol in August 2009. Although nothing has been reported about a potential comeback this year, last year’s offer clearly indicates that we are recovering from this recession.  If Paula Abdul is being offered $5 mil to get drunk and make nonsensical comments on TV, then we better be creating more jobs in the meantime.  And if Paula refuses to come back, then I’d be happy to mumble and drink scotch out of a sippy cup on primetime television. I’ll even cut you a discount and do it for $1 mil.

I think I have proven my point: Paula Abdul is so much more than a singer, dancer, choreographer, and druggy cougar.  As she would say, “You’ve got a sensitive side of you… got, uh, total, uh spicy side of you… You are real.  You’ve… got… to keep going.”  And on that, I rest my case. Bring back Paula Abdul to American Idol!

Filed under Arts and Entertainment